Researchers from NASA, the National Snow and Ice Data Center and others using satellite data have detected a significant loss in Arctic sea ice this year.

On Sept. 21, 2005, sea ice extent dropped to 2.05 million sq. miles, the lowest extent yet recorded in the satellite record. Incorporating the 2005 minimum using satellite data going back to 1978, with a projection for ice growth in the last few days of this September, brings the estimated decline in Arctic sea ice to 8.5 percent per decade over the 27 year satellite record.

Scientists involved in this research are from NASA’s Goddard Space Flight Center, Greenbelt, Md., NASA’s Jet Propulsion Laboratory, Pasadena, Calif., the National Snow and Ice Data Center at the University of Colorado, Boulder, and the University of Washington, Seattle.

Satellites have made continual observations of Arctic sea ice extent since 1978, recording a general decline throughout that period. Since 2002, satellite records have revealed early onsets of springtime melting in the areas north of Alaska and Siberia. In addition, the 2004-2005 winter season showed a smaller recovery of sea ice extent than any previous winter in the satellite record and the earliest onset of melt throughout the Arctic. 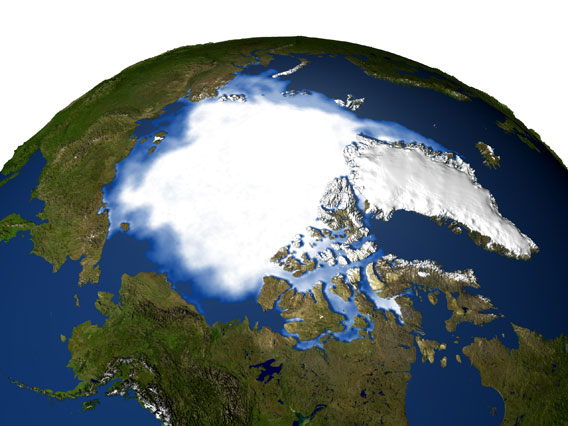 Arctic sea ice typically reaches its minimum in September, at the end of the summer melt season. The last four Septembers (2002-2005) have seen sea ice extents 20 percent below the mean September sea ice extent for 1979-2000.

Perennial ice cover is ice that survives the summer melt, consisting mainly of thick multiyear ice floes that are the mainstay of the Arctic sea ice cover. “Since 1979, by using passive microwave satellite data, we’ve seen that the area of Arctic perennial sea ice cover has been declining at 9.8 percent per decade,” said Joey Comiso, senior scientist at Goddard.

Rising carbon dioxide levels could devastate marine food chain – 29-September-2005
Rising carbon dioxide in the atmosphere could make oceans to acidic for marine organisms producing protective shells according to research published in the journal Nature. Such a development could be catastrophic for the ocean’s food chain and devastating for world fisheries.

Decline of Arctic sea ice increases – 29-September-2005
For the fourth consecutive year, NSIDC and NASA scientists using satellite data have tracked a stunning reduction in arctic sea ice at the end of the northern summer. The persistence of near-record low extents leads the group to conclude that Arctic sea ice is likely on an accelerating, long-term decline.

Capturing and storing the carbon dioxide could be key in minimizing climate change – 26-September-2005
A new assessment report finalized here today by the Intergovernmental Panel on Climate Change (IPCC) concludes that capturing and storing the carbon dioxide (CO2) produced by power plants and factories before it enters the atmosphere could play a major role in minimizing climate change.

Summers in arctic getting longer and hotter – 23-September-2005
In a paper that shows dramatic summer warming in arctic Alaska, scientists synthesized a decade of field data from Alaska showing summer warming is occurring primarily on land, where a longer snow-free season has contributed more strongly to atmospheric heating than have changes in vegetation.

The kind of devastation seen on the Gulf Coast from Hurricane Katrina may be a small taste of what is to come if emissions of the greenhouse gas carbon dioxide (CO2 ) are not diminished soon, warns Dr. Ken Caldeira of the Carnegie Institution’s Department of Global Ecology in his opening remarks at the 7th International Carbon Dioxide Conference in Boulder, Colorado, September 26, 2005.

More U.S. corporations than ever before now factor climate change into the risks and opportunities faced by their businesses, according to a report released today by the Carbon Disclosure Project, a coalition of institutional investors with more than $21 trillion in assets. Increased interest from the investment community, in conjunction with related macro-economic developments, is encouraging the development of strategies to reduce greenhouse gas emissions.

Humans impacted climate thousands of years ago September 9, 2005
New research suggests humans were influencing the world’s climate long before the Industrial Revolution. Atmospheric levels of methane, a potent greenhouse gas, climbed steadily during the first millennium due to massive fires set by humans clearing land for agriculture. The research, published in this week’s Science, is detailed below in three presss releases from sponsoring institutions.

Carbon reinjection strategies to be affected by climate change September 8, 2005

Global warming will cause gasses trapped beneath the ocean floor to release into the atmosphere according to research presented at the Annual Conference of the Royal Geographical Society. The impact could initiate a catastrophic global greenhouse effect.

A dramatic rise in carbon dioxide 250 million years ago may have caused global temperatures to soar and result in Earth’s greatest mass extinction, according to a study published in the September issue of Geology. Global warming, which may have produced temperatures 10 to 30 degrees Celsius higher than today, would have had a significant impact both on oceans, where about 95% of lifeforms became extinct, and on land, where almost 75% of species died out.

For the perennial ice to recover, sustained cooling is needed, especially during the summer period. This has not been the case over the past 20 years, as the satellite data show a warming trend in the Arctic, and it is not expected to be the case in the future, as climate models project continued Arctic warming. If ice were to grow back in these areas, the new ice would likely be thinner and more susceptible to future melt than the thick perennial ice that it replaces.

Scientists are working to understand the extent to which these decreases in sea ice are due to naturally occurring climate variability or longer-term human influenced climate changes.

Scientists believe that the Arctic Oscillation, a major atmospheric circulation pattern that can push sea ice out of the Arctic, may have contributed to the reduction of sea ice in the mid-1990s by making the sea ice more vulnerable to summertime melt.

Sea ice decline could also affect future temperatures in the region. Ice reflects much of the sun’s radiation back into space. As sea ice melts, more exposed ocean water reduces the amount of energy reflected away from the Earth. “Feedbacks in the system are starting to take hold,” says the National Snow and Ice Data Center’s lead scientist Ted Scambos.

Claire Parkinson, senior scientist at Goddard, cautions against thinking that Arctic sea ice is gone for good, especially with such limited data. “The reduced sea ice coverage will lead to more wintertime heat loss from the ocean to the atmosphere and perhaps therefore to colder water temperatures and further ice growth,” said Parkinson.

There are many factors beyond warmer temperatures that drive changes in the Arctic. A longer data record, combined with observations from additional environmental parameters now available from NASA satellites, will help scientists better understand the changes they are now seeing.

This is an adapted press release from NASA. The original version appears at Satellites Continue To See Decline In Arctic Sea Ice In 2005