GULFPORT, Mississippi (Reuters) – Wildlife experts on Thursday began rescuing a group of eight bottlenose dolphins swept from their aquarium home into the Gulf of Mexico by Hurricane Katrina. 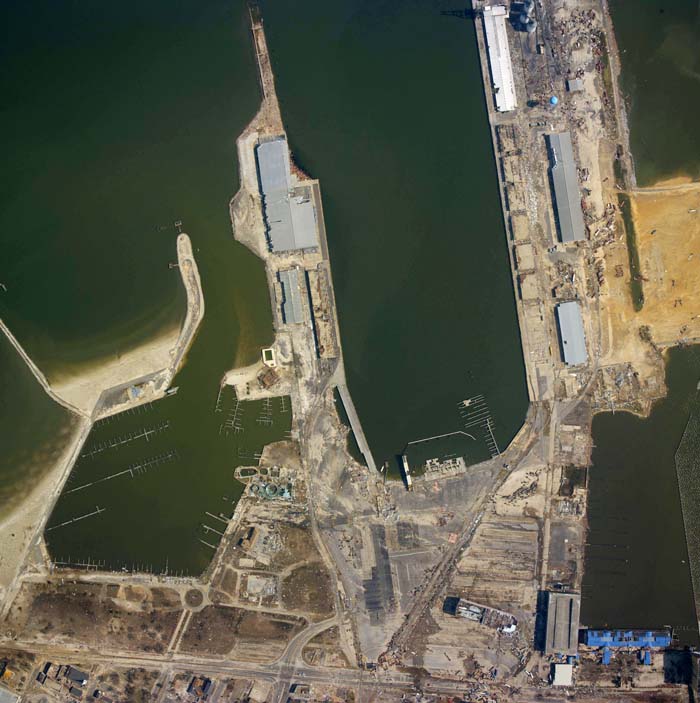 Gulfport, Miss., showing the damage to the port there. Photo courtesy of NOAA


Moby Solangi, president of the Marine Life Oceanarium in Gulfport, Mississippi, said two of the dolphins, 30-year-old Jackie and her 16-year-old offspring, Toni, had been rescued.

Six others, including Jackie’s 5-year-old son, Elijah, were still in the Gulf and would be rescued over the next few days.

“They all look good. They’re coming right up to the boats,” said Jeff Siegel, director of operations at the oceanarium.

Teams of oceanographers and Coast Guard officers used orange rafts equipped with mattresses to transport Jackie and Toni to shore where an air-conditioned van made the short trip to temporary quarters in a Holiday Inn swimming pool.

They will then be transported to other aquariums in the country in salt-water tanks that will be provided by the U.S. Navy.

A wave estimated to be 40 feet high swept the sea mammals from their tank at the oceanarium and into the Gulf when Katrina struck on August 29, the U.S. National Oceanic and Atmospheric Administration Fisheries Service said.

The dolphins were spotted in the Gulf, off the Mississippi coast on Saturday and appeared to have survived the cataclysm but Solangi said some appeared to be underweight while others had scratches.

Because they lived in captivity and do not know how to forage for food, they are being fed several times a day from a boat by oceanarium workers.

Of 26 sea lions kept at the facility, five are dead, one is missing and the other 20 have gone to other aquariums, mostly in Florida. A seal is also was missing.

A crumpled support arch for the oceanarium’s dome was all that was left standing amid a scene of coastal destruction.