Gabon sets aside 10 percent of country as protected parks


Gabon sets aside 10 percent of country as protected parks

Gabon sets aside 10 percent of country as protected parks

An unprecedented 10 percent of nation’s land mass is set aside for gorillas, elephants and chimps.

In a move that sets a new standard in African conservation, the nation of Gabon, which contains some of the most pristine tropical rainforests on earth, announced today that it will set aside 10 percent of its land mass for a system of national parks. Up to this point, Gabon had no national park system. The Gabonese government has been working closely with The Wildlife Conservation Society (WCS) on conservation issues for the past ten years. The announcement is a major victory for Africa’s wildlife.

According to Gabon’s President El Hadj Omar Bongo, some 13 national parks comprising more than 10,000 square miles will be established, protecting vital habitat for gorillas, chimpanzees, forest elephants and other spectacular wildlife. Percentage-wise, only Costa Rica has set aside more land for conservation, though the total size of its parks is much smaller.

“This is a decision of global significance that implies certain sacrifices in the short- and medium-term in order to achieve our goal of preserving these natural wonders for future generations,” said Gabon’s President El Hadj Omar Bongo.

“This is one of the most courageous conservation acts in the last 20 years,” said Dr. Steven Sanderson, president and CEO of the Wildlife Conservation Society. “President Bongo has set a new standard for wildlife protection in Central Africa — one that we hope other nations will follow.” 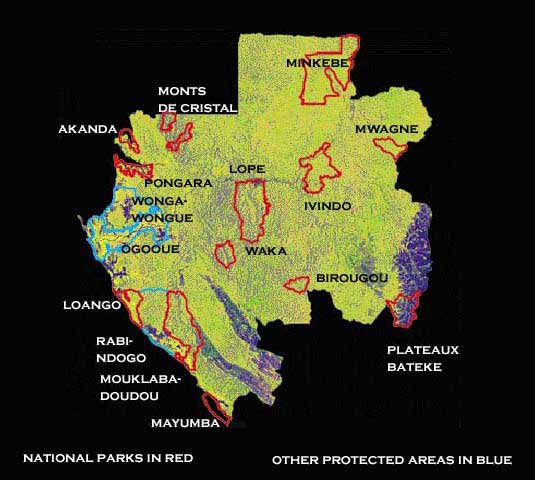 The parks range from regions along Gabon’s coastline, where hippopotamuses frolic on untouched beaches, to unique forest clearings – home to “naïve” populations of gorillas that show no fear of humans. Much of the land set aside was based on years of field research by the Wildlife Conservation Society, which has studied Gabon’s wildlife since 1985.

In 2000, WCS conservationist Lee White played a key role in resolving a conflict between loggers and conservationists in the Lopé Reserve, a pristine forest-savanna mosaic, which will be part of the new park system. Using hard science, White helped direct logging activities away from pristine areas of high biological importance, in exchange for limited logging in less productive areas.

At the same time, at the behest of Gabon’s Minister of Forests and Water at the time, Dr. Richard Ouvinet, WCS, along with WWF began a survey of Gabon’s remote areas in order to help the government develop a national park system. Meanwhile, National Geographic drew additional well-deserved publicity to Gabon’s extraordinary biological wealth, while filiming and photographing WCS Conservationist Mike Fay’s “Megatransect”– a joint expedition between WCS and National Geographic across the Congo Basin forest. As a result of these and other factors, President Bongo agreed that a park system should become a reality.

Many of the new parks will be developed for ecotourism, as an economic alternative to exploiting Gabon’s forests for timber. A commitment of U.S. funding announced by Secretary of State Colin Powell today, will help fund this endeavor.

“By creating these national parks, we will develop a viable alternative to simple exploitation of natural resources that will promote the preservation of our environment. Already there is a broad consensus that Gabon has the potential to become a natural Mecca, attracting pilgrims from the four points of the compass in search of the last remaining natural wonders on earth,” President Bongo said.

You can learn more about Gabon and its parks and wildlife at gabonnationalparks.com

This is a modified press release from WCS.

A combination of natural and man-made threats is killing gorillas and chimpanzees in Central Africa, and experts say $30 million is needed for special programs to save some of mankind’s closest relatives from disappearing.

For the first time ever, a genetic study has followed a single humpback whale from one ocean basin to another, adding to traditional notions of the migratory patterns of these majestic marine mammals in the process, according to researchers from the Wildlife Conservation Society (WCS), the American Museum of Natural History (AMNH), and New York University. In the most recent Royal Society’s Biology Letters, a male humpback whale that was first sighted in Madagascar’s Antongil Bay in 2000 was found in 2002 swimming off the coast of Loango National Park in Gabon–on the other side of the African continent.

China, as the fastest growing economy in the world, is poised to make significant impacts on the global market and the global environment, especially with its expanding involvement with nations rich in natural resources but deficient in economic and political stability. Nowhere is this more apparent than in Africa where China has rapidly bolstered its ties in recent years with the majority of the continent’s 54 nations.