Group fights to save wild species from poaching and habitat loss 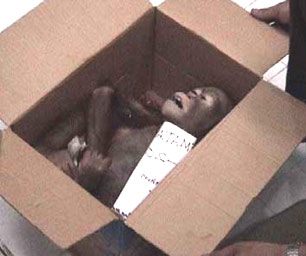 Indonesia is one of the most biodiverse regions in the world and yet has the longest list of endangered wild species. Wild species are becoming endangered due to unsustainable deforestation and poaching. The government does not yet have a national plan to seriously address this problem; while Indonesia has laws protecting wild species, enforcement is weak.

ProFauna Indonesia, a wildlife conservation society, has urged the Indonesian government to take urgent steps to deal with the rampant illegal trade in endangered wildlife. Hundreds of thousands of wild animals are poached and traded each year for domestic and overseas “exotic pet” markets. Many animals are inhumanely exploited for bush meat and “medicine”. 95% of traded animals are caught in the wild, threatening biodiversity and threatening some species with extinction.

Last week ProFauna launched its national campaign against the trade in wildlife with a demonstration in front of the presidential palace in Jakarta and the delivery of a petition to the government of Indonesia. Conservationist activists mphasized that the wildlife trade is not only cruel, but a crime. Activists carried giant inflatable wild animals, including tigers, orangutans, parrots and turtles. More demonstrations will be staged subsequently in 17 other cities throughout Indonesia.

ProFauna has urged Indonesian President, Susilo Bambang Yudhoyono, to deem that the illegal trade in wildlife is a serious national issue and for him to take concrete steps to combat the problem.

In the last 10 years ProFauna Indonesia has conducted a number of investigations into this trade in Indonesia, ranging from Papua up to Medan, North Sumatera. There is good reason to be concerned as the trade seems to be uncontrollable, despite a few areas which have successfully curbed it, such as that of sea turtles in Bali. However, in other cities including Jakarta, Surabaya, Medan, Jambi, Palembang and in Central and North Borneo, up to Papua, many endangered species which are supposed to be protected by law, are still being poached and traded. Some are even bought by government officials, police and military personnel.

The poaching of endangered animals for pets or for their carcasses as food and ornaments is not something that can be consigned to a less humane past. Endangered animals, such as orang-utans or tigers are still being traded illegally today. The lucrative trade is run by a network of criminal smugglers who have resorted to torture and even murder to protect their business and punish conservationist activists who seek to stop the trade.

ProFauna’s undercover investigators followed some wildlife poachers and smugglers for months to document the evidence. Wild animals endured horrendous long smuggling journeys from the jungle to the ports, stuffed in cramped cages without food and water. 40% cockatoos and parrots died before they reach the markets. For each animal sold, many have died needlessly.

Orphaned baby orangutans are given tranquilizer or drugs before being smuggled out of the country. They are stuffed into small boxes and disguised as box of clothing or food. Often orangutans die due to the long journey, suffocation or a drug overdose . Those who survive the trip overseas may be exploited in the circus, entertainment industries or zoos. Many countries are still not imposing tight regulation and control on import of endangered wild species.

The major obstacles in the struggle to save wild species in Indonesia are: public ignorannce about the wildlife conservation and animal welfare, poverty, weak enforcement of the law, corruption and lack of Indonesian government’s strategy in protecting wildlife and their habitats. The voice of small NGOs is often ignored by the government.

Conservationists are extremely concerned that some species could be extinct in a couple of decades at the current rate of habitat loss and poaching.

ProFauna Indonesia is an Indonesian society for the protection of wild animals and their habitats. To support and sign their petition, please visit:
www.profauna-uk.org and www.profauna.org

Article from the ProFauna UK