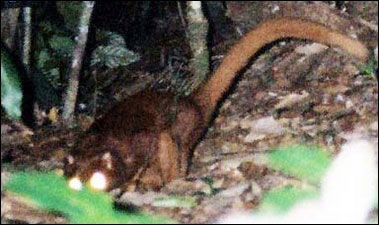 Scientists may have discovered a new species of fox-like mammal in the rainforests of Borneo. The animal was caught on film by an automatic infra-red camera positioned in the forest of the Kayam Menterong National Park in the Indonesian section of the island during a survey by the World Wildlife Fund (WWF).

Scientists say the animal is has a reddish-colored coat, a bushy tail, and slightly extended back legs, suggesting that it may be partly arboreal. Local hunters failed to recognize the creature from the pictures.

The sighting follows a WWF report showing that at least 361 new species have been identified and described on Borneo between 1994 and 2004: 260 insects, 50 plants, 30 freshwater fish, 7 frogs, 6 lizards, 5 crabs, 2 snakes and a toad. Much of the island’s wildlife species — even the largest mammals — have yet to be closely examined by scientists and this new discovery adds to the urgency of studying these rapidly disappearing forests.

Borneo’s forests continue to be destroyed at an alarming pace. Recent research by Dr. Lisa Curran suggests that in Western Kalimantan, a state in Indonesian Borneo, “protected” lowland forests decreased by more than 56 percent between 1984 to 2001 while some estimate that most of the island’s rainforests could be felled by 2020. Illegal logging is rampant in the region and agricultural fires burn large tracts of forest every year.

Despite pressure from timber interests, the Indonesian government recently moved to slow logging in nearby Betung Kerihun National Park by closing a nearby border crossing which had been used to take the timber into Malaysia. Critics say that the impact of this move will be short-lived and that the government’s campaign is ineffective given its emphasis on cutting off the supply of illegal logs, rather than reducing demand for them. Much of the timber cut from Borneo’s rainforests is illegally smuggled into China as “Malaysian” wood. China’s voracious appetite for wood is fueling illegal logging activities throughout Indonesia and has spurred the development of a major wood processing industry in China. In Indonesia, government and military officials have been implicated in the illegal logging operations but to date, no one has been prosecuted for participating in such activities or accepting bribes.

Whether these efforts to slow illegal forest clearing in Indonesia will determine the fate of Borneo’s unique species. The ecological future of the island hangs in balance.

Gland, Switzerland  WWF researchers may have discovered a new, mysterious carnivore species in the dense, central forests of Borneo.

The animal, a mammal slightly larger than a domestic cat with dark red fur and a long, bushy tail, was photographed twice by a camera trap at night. This could be the first time in more than a century that a new carnivore has been discovered on the island.

However, WWF researchers have not yet established whether this is an entirely new species or if it is a new species of marten or civet cat, which looks like a cross between a cat and a fox.

They are hoping to be able to confirm more about the discovery by setting cage traps and catching a live specimen.

“We showed the photos of the animal to locals who know the wildlife of the area, but nobody had ever seen this creature before,” said Stephan Wulffraat, a biologist who is coordinating WWF’s research on this species. “We also consulted several Bornean wildlife experts, some thought it looked like a lemur, but most were convinced it was a new species of carnivore.”

WWF stresses that the strange animal, which also has very small ears and large hind legs, might remain a mystery for ever, if its habitat is not adequately protected.

Kayan Mentarang National Park in Kalimantan, where the carnivore was photographed, is located in the “Heart of Borneo”, a mountainous region covered with vast tracks of rainforest.

But plans announced by the Indonesian government in July to create the world’s largest palm oil plantation in this area would have a devastating impact on the forests, wildlife and indigenous people.

The proposed scheme, funded by the China Development Bank, is expected to cover an area of 1.8 million hectares, equivalent to about half the size of The Netherlands.

WWF stresses that infertile soil and steep areas, such as those in the Heart of Borneo, prevent the development of oil palm plantations.

According to experts, it is not recommended to plant oil palm in areas 200 metres above sea level, because of low productivity. Most of the Heart of Borneo is between 1000 and 2000 metres high.

WWF’s Heart of Borneo initiative aims to assist the island’s three nations (Brunei, Indonesia and Malaysia) to conserve more than 22 million hectares of rainforest in the area.

“This discovery highlights the urgent need to conserve the unique forests in the Heart of Borneo, as this creature  whatever it is  hasn’t been seen since the pictures were taken and is therefore likely to occur in very low numbers,” said Stuart Chapman, WWF’s International Coordinator of the Heart of Borneo Programme. “What other secrets do these remote forests hold?”

It is extremely rare nowadays to discover a new mammal species of this size, particularly a carnivore, WWF says. The potential new species of carnivore in Borneo would be the first since the discovery of the Borneo ferret-badger in 1895.

The above is a modified news release from WWF

BACKGROUND: Borneo, the third largest island in the world, was once covered with dense rainforests. With swampy coastal areas fringed with mangrove forests and a mountainous interior, much of the terrain was virtually impassable and unexplored. Headhunters ruled the remote parts of the island until a century ago.

In the 1980s and 1990s Borneo underwent a remarkable transition. Its forests were leveled at a rate unparalleled in human history. Borneo’s rainforests went to industrialized countries like Japan and the United States in the form of garden furniture, paper pulp and chopsticks. Initially most of the timber was taken from the Malaysian part of the island in the northern states of Sabah and Sarawak. Later forests in the southern part of Borneo, an area belonging to Indonesia and known as Kalimantan, became the primary source for tropical timber. Today the forests of Borneo are but a shadow of those of legend.