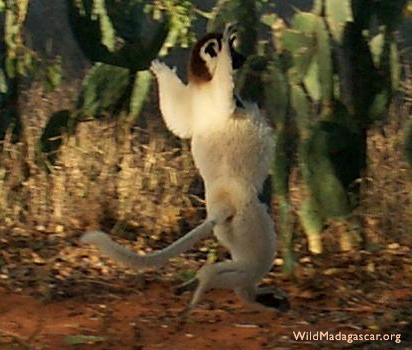 In the dry deciduous forests of south western Madagascar there lives a lemur that loudly cusses but “dances” like a ballet performer. Verreaux’s sifaka is among the most popular of lemur species, a group of primates endemic to islands off the southeastern coast of Africa. While threatened, Verreaux’s sifaka is easily spotted in several of Madagascar’s more accessible parks.

A little larger than California, Madagascar is the world’s fourth largest island. Isolated from mainland Africa for about 160 million years, 80% of its native flora and fauna are unique to the island. While Madagascar is best known for its lemurs it also is home to a number of other evolutionary peculiarities from the streaked tenrec, a spiny yellow and black insectivore that resembles a miniature hedgehog and makes grinding-chirping noises when threatened, to the fossa, a carnivorous mammal that looks like a cross between a puma and a dog but is closely related to the mongoose. Madagascar also has more than half the world’s chameleon species, neon green day geckos, three times as many kinds of palm trees as mainland Africa, and an entire ecosystem consisting only of endemic spiny plants. Needless to say, Madagascar’s flora and fauna make it one of the most biologically important places on Earth.

Lemurs are a key component in Madagascar’s biodiversity. Lemurs belong to a group of primates known as prosimians that were once distributed worldwide but today have been largely replaced by monkeys. It is only because of Madagascar’s isolation that lemurs have managed to survive and flourish. Currently about 60 kinds of lemurs are recognized by scientists, a number that has grown in recent years with the discovery of several new species including two this year. Despite these findings, Madagascar’s lemur diversity is considerably poorer than when humans first set foot on the island about 2000 years ago. Since then, the island’s largest lemurs species have been hunted to extinction and suffered from habitat loss induced by climate change and human activities (especially land-clearing with fire).

Even with these losses, Madagascar’s lemurs display a range of interesting behaviors from singing like a whale (the indri) to extracting insects from tree bark using a long twig-shaped finger (the aye-aye). Among the most amusing of these behaviors is that of Verreaux’s Sifaka, which can be spotted in deciduous forest habitats including Andohahela, Berenty, Beza-Mahafaly, Isalo, and Kirindy.

While sifakas are generally found in trees where they are capable jumpers and feed on fruit, flowers, wood, bark and leaves, they are best known for their “dancing.” Since trees in their habitat are often dispersed, sifakas cross open ground by sashaying on their hind legs with arms aloft. There are few animal sights more entertaining than witnessing a group of sifakas crossing a road.