China, as the fastest growing economy in the world, is poised to make significant impacts on the global market and the global environment, especially with its expanding involvement with nations rich in natural resources but deficient in economic and political stability. Nowhere is this more apparent than in Africa where China has rapidly bolstered its ties in recent years with the majority of the continent’s 54 nations.

There are many reasons to account for this seemingly unlikely set of alliances with a most distant neighbor. Among them is the diminished presence of the United States and other Western powers on the continent, with the majority of the attention trained presently on the Middle East. The standard US response in recent years to local conflict in African nations has been to withdraw both troops and civilians, reduce military aid and issue security advisories to would be visitors and investors. During the Ethiopia-Eritrea war in the late 90s, China’s government sent over more citizens viewing the war as an opportunity — in the absence of an American presence — to expand its influence on and strengthen its connections to Ethiopia.


Today, the strong Chinese presence in Ethiopia is shared in other African nations. Beijing, representing the whole of the governing body for China, is pushing broadly and laterally into the continent nurturing deep economic, political and militaristic ties, and angling for prime access to Africa’s vast natural resource base.

In fostering these relationships, China seeks to establish and maintain geopolitical alliances that will aid in maneuvering the country into the status of a global superpower. China is concerned with reasserting political authority over Taiwan — its wayward, economically and socially superior cousin — as well as establishing a certain degree of political muscle against the US and its manifestation as the primary global force in international organizations like the United Nations.

China is pushing into Africa on many fronts. In Nigeria, where oil is abundant, China is rebuilding the railways. In Rwanda, Chinese companies have paved more than 80 percent of the main roads, and in Zambia, Chinese companies own one of the country’s largest copper mines. In more than a dozen countries, Chinese firms are searching for oil and gas while rebuilding electrical grids and telecommunications networks. The investment interests range from massive state-funded projects to small private ventures as Beijing pushes for its government, corporations and citizens alike to set up shop. Some government officials from the US have taken notice of this activity and have growing concerns about China’s increasing monopolistic influence on Africa. Among other resources, the continent is becoming a major global supplier of timber and China may soon control access to this resource. And unlike the US, which bars companies from doing business with outlaw regimes, Beijing expresses no qualms about dealing with Africa’s most brutal and corrupt leaders, while Chinese businessmen take on and fund projects that Western countries reject on principle. China’s ties to Africa go back to the 1950s when Beijing got behind various independence movements as a means of countering US and Soviet influence in the region. 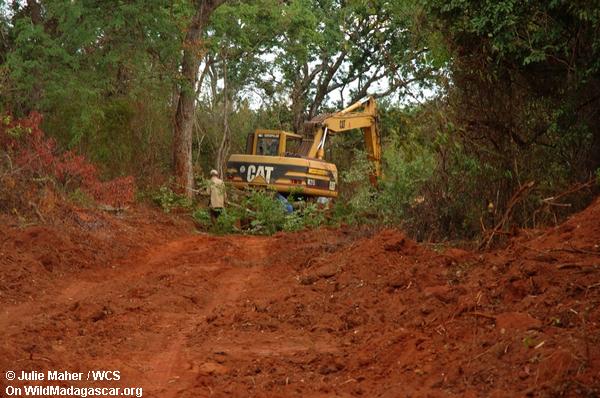 Beyond establishing control over African resources, China is looking to line up economically marginal nations to serve as producers of and markets for its products in the future. As China gains ground in these markets, the US stands to lose out: in spite of a trade pact signed with Africa in 2000, American influence has leveled off and even declined in many of the continent’s nations.

China’s insatiable demand for resources is rooted in its tremendous economic growth. With growth rates exceeding 7%, it is estimated that by 2020 the GDP of China will exceed that of Japan, behind only the US and EU. China’s need for resources — including everything from aluminum to crude oil to wildlife parts — has driven it to pursue resources beyond its borders. Recent domestic events have made foreign sources for raw materials an even greater imperative. An example can be found in the government’s response to the devastating Yangtze River floods of 1998 which resulted in more than 2500 deaths and caused billions of dollars in damage. Blaming rampant logging in the region, the Chinese government summarily banned timber harvesting in large areas of the country. Orders were issued to protect healthy forests, rehabilitate compromised regions and replant many woodland areas that had been cleared for agricultural use. Further, offcials launched a crackdown on illegal logging within China. Environmentalists saw these new precepts, provisions and activity as a reason for hope that China might be altering its environmental course for good. Their optimism was short-lived. While the ban has improved forestry management in China, environmental groups charge that the government now goes elsewhere for the wood it needs, accelerating timber poaching in other nations and becoming the main hub of a global network of trade of illegal timber.

China’s need for timber is evident, but the government is quick to deny the controversial means for supplying that need. The Chinese government has continually claimed that their country has a self-sustainable timber industry, but then has gone on to slash tariffs on imported timber. The State Forest Administration (SFA) recently completed a five-year survey of the country’s forests which found that consumption and production of timber are evenly balanced and that the industry will continue meeting China’s need for wood from its own forests for the foreseeable future. According to The Economist, a senior SFA official has said, “It is out of the question that the country would satisfy its domestic demands by increasing tree-felling from neighboring countries.” The choice of the term “neighboring countries”-gives China a convenient exception clause since it excludes Equatorial Guinea, along with other African and South American nations. When one puts these kind of assertions from the government, exception clauses or not, next to figures from various environmental groups, the chasm between the two becomes painfully glaring and wide.

According to conservationists and some fairly compelling statistics, China is already importing vast quantities of timber, much of which is illegally harvested. Imports of industrial wood — used in construction, furniture-making and pulp mills — have more than tripled since 1993. Even if the allegations put forth by various green groups are false, China’s predicted growth rates and recent forest preservation measures in country suggest that the nation cannot possibly support itself on domestic supply alone. According to the World Wildlife Fund (WWF), China’s demand for imported industrial wood — timber, paper and pulp — will grow by at least 33 percent within the next five years, from the current 94 million cubic meters to 125 million cubic meters.

One of the major contributing factors accounting for the rapid growth of the industry is construction, says Zhu Chungquan, forest program director of the Beijing-based WWF agency. To put a number on the level of demand in perspective, one government initiative, a housing reform package set out in 1998, ironically enough, calls for the construction of five billion square meters of new housing and two billion square meters of renovated housing by 2005. This package is part of the country’s urbanization policy to increase living spaces and quality of life in the ever increasing crowded conditions in Chinese cities. What is more, the Chinese government plans on moving 300 million rural people into the cities.

China now trails only the US in wood consumption and with the country’s projected growth rates, China is sure to soon surpass the States to frontrunner status for consumption. According to the WWF, the flourishing construction and furnishing sectors accounted for the consumption of 90 million cubic meters of timber in 2003, or 65 percent of the total consumption rate for China — 138 million cubic meters. Beyond the construction of living quarters, China’s economic growth results in emergent wealth. With greater spending power and economic means, people are replacing furniture at a faster rate and remodeling. Adding fuel to the fire, by 2010, the WWF predicts that China will be able to meet only half of its demand for industrial wood. The Britain-based environmental group, the Environmental Investigation Agency (EIA) asserts that China imported one million cubic meters of logs in 1997 and 16 million cubic meters in 2002.

In China, as in so many areas of the world where problematic environmental practices have seductive and have undeniable economic benefits, all of this reportedly illegal timber is providing a great number of jobs. According to The Economist, The small town of Nanxum near the port city of Zhangjiagang used to produce only small amounts of wooden floorboards up until about five years ago. Today, there are 500 floorboard factories and about 200 sawmills, which the EIA says together process one merabu log — a type of sturdy tropical hardwood — every minute of every work day. The explosion of work opportunities and production from this industry is clear, but the origin and sheer quantity of the supply is certainly troublesome. The government-issued statements and actual directives simply do not add up. Logging cannot be limited as supply and production soar.

What the Chinese government does and does not endorse as the truth aside, other bodies assert some disturbing claims for logging activity in several African nations. According to British website www.globaltimber.org.uk, China — along with Russia, Brazil, Myanmar and Papua New Guinea — is also taking significant amounts of wood from forests in Cameroon, Congo, Equatorial Guinea, Gabon and Liberia.

In Cameroon, 50 percent of exports of timber are illegally performed. The figure is 90 percent in the Democratic Republic of Congo, as dealers with political ties flagrantly disregard a law requiring log processing prior to export since China’s primary interest is in logs. In Equatorial Guinea it is again 90 percent with the same indifference to laws concerning maximum allowable cut and de facto concession size (largely attributable to one company and its sponsors, most of which supply China’s imports). Gabon comes in at 70 percent, while Liberia again reaches 90 percent, with a recent surge linked to the civil war.

Illegal exports, the species from which the wood-based products that China exports in greatest quantity, are generally not declared in national trade statistics, for obvious reasons. The result of the secrecy is that there is no way to determine the true extent of illegal logging and exporting activity; it may be even worse than reported, but impossible to track. Further, a large proportion of these exports comprises commodities, notably furniture, for which unlike most other trading nations, China chooses not to declare weight or other physical measures of quantity. This provides a convenient bureaucratic loophole through which literal tons and tons of timber can pass though undocumented. As imports soar along with corruption and incompetence within the sector, it seems this situation will only worsen until the industry implodes from its own ill-conception and operation.

Given China’s reportedly poor environmental record and current practices, this burgeoning stronghold on African resources is a grave situation. Back in the Beijing office of the WWF, Chungquan is lobbying Chinese sourcing companies to join the Chinese Forest and Trade Network, a business-environmental partnership for certified wood. Despite the figures and unsustainable trajectory, Chungquan retains some optimism for China’s future, and hopefully, some peripheral benefit for the African nations it imports from. He believes that China’s admittance into the WTO and APEC may encourage importers to use certified wood as tariffs are lowered. Few on the environmental side may share this opinion, but there is always hope.

The forests of Zhangjiagang are horizontal: tens of thousands of felled, stripped trees lying on the quayside of China’s biggest timber port, far from their roots in Indonesia, Russia, South America and Africa.

The trunks of pine, maple, merbau and zebra wood are dead, but this forest is growing. Every year, more and more logs are shipped into these wharves to satisfy the voracious demand for timber in the world’s most populous and fastest rising nation.

In many cases they are illegal, smuggled from protected rainforests despite China’s pledges to tackle the huge international trade in contraband logs.